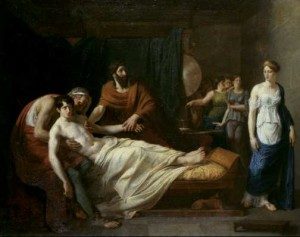 Falling in love is nice, isn’t it? But love is also a subversive force, capable of compromising social stability – when marriage is supposed to be an unbreakable link, and social consensus is built upon its durability, what is supposed to happen to lovers who do not belong together, for example if their families do not share the same ethnic or religious background? Or when they don’t belong to the same class? What terrible disruptions occur, when love results in adultery? Literature is full of such stories, and we all love those stories. They seem a bit old-fashioned. But they can also resonate, sometimes tragically, in our present times and lives.

This is exactly why love has long been constructed as a disease: *lovesickness. *Doctors were once reluctant to discuss the evident symptoms of unspeakable love as a sickness, as exemplified by a famous case recorded by Galen, the wife of a prominent Roman citizen, Justus: her sleeplessness and depression could be the signs of one of two things, a melancholic disposition or some hidden worry. It turned out to be the latter, as chief detective Galen eventually found out the lady was in love with a dancer, Pylades. Galen does not dwell on the consequences and the social implications of his discovery. What happened to the poor woman? Did Galen share the news with the husband? We will never know. This story has fascinated physicians later on, together with another famous similar story concerning an earlier physician, Erasistratus, at the court of King Seleucus (see above one of the many depictions of the scene, by Guillemot, 1808). In the Renaissance especially, when Galen’s works began being read in the original again, the “lady in love” was often included in collections of medical short stories, famous cases made to inspire the doctors of the time. The role of the pulse, crucial in Erasistratus’ and Galen’s diagnostic, was also rediscovered as a powerful diagnostic tool. Doctors reclaimed lovesickness as one of their areas of expertise, in a social context that grew concerned about its consequences. Lovesickness lead to depression, violence, rape, sometimes death. The only cure, as was sometimes recognised, was to give in: but that was rarely socially acceptable. Hopeless “cures” included dark magic and exorcisms; medicine jumped in the market with therapies based on humoral theory and apparently sound reasoning. But in the early 17th century, as several major works focused, partially or entirely, on lovesickness, the fresh picture emerging from those eclectic texts was far from reassuring: Jacques Ferrand compiles and discusses all known cures against lovesickness, including the less commendable ones. Burton stresses the hopelessness of this form of melancholy, which he deems especially dangerous in women…

So, how lovesick are you today? Remember, marriage is the key to happiness !

Galen, On Prognosis, chapter 6 (the lady in love)

Jacques Ferrand, A treatise on lovesickeness