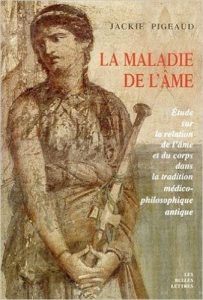 In a week that has witnessed so many distressful events (a massive earthquake in New Zealand, the election of Donald T. and the death of Leonard Cohen), it would be easy to overlook the passing of a venerable Classics scholar: Jackie Pigeaud, who was quietly laid to rest last Thursday in the soil of his native Vendée.
A classicist and expert in medical thought, Jackie Pigeaud was special. Unlike most of his fellow countrymen and colleagues, he was a complete anglophile, and a scholar without boundaries. Usually filed under “Latin literature”, he was in fact equally at ease in Greek, Latin, French and a few other languages. He routinely addressed audiences of classicists or ancient historians, and crowds of doctors. To modern historians, he enjoyed talking about Aretaeus of Cappadocia; to classicists, he kept hammering the necessity of reading early modern, and modern thinkers. “If people are not interested in classical authors any more, he also used to say, that is because we are poor philologists”. He meant that no accomplished Classicist should neglect the public, or fail to address the new questions worth asking ancient literature.
A free mind; a “bon vivant”; a dandy often seen sporting pin-striped grey suits and hats; a family man (he had many children and grandchildren); a man who travelled the world (never without his wife, Alfrieda) to speak about medical texts to all kinds of people; a relentless collector of books; a classicist whose works were translated into Korean, Italian or Portuguese, but not English. Some of the many facets of Jackie Pigeaud. I feel privileged to have met him and his wife: they were kind, hospitable, and encouraging to young scholars. I recall fondly the house crumbling under the weight of thousands of books, some really rare and precious. I recall missing out on their invitations to the annual Entretiens de la Garenne Lemot, which I now regret.

His works similarly defy disciplinary boundaries: his thesis, La maladie de l’âme, explored both Greek and Latin literature about melancholy, a topic then barely studied by classicists in France and in other European countries, bar Helmut Flashar’s classic 1966 book in German. Suppressing the artificial barriers erected by scholarship between “literary” and “technical” texts was one of his chief goals; highlighting the power of medical imagination in ancient thought was another one. In more recent studies, he became increasingly interested in aesthetics and the body. He also edited many a conference volume; he prefaced and translated countless editions of ancient Latin and Greek texts. As a Classicist, he inspired generations of youths. As a medical historian, he illuminated so many neglected texts. R.I.P. Jackie Pigeaud.