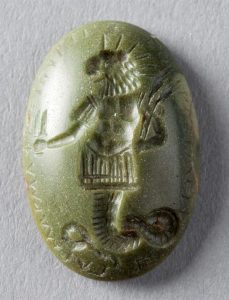 Throughout his works on pharmacology, and especially in his fundamental On simple drugs, Galen offers views on the limits of acceptable in the realm of remedies. A comprehensive, wide-ranging treatise, Galen’s On simple drugs is unique among ancient works on remedies in that the author shares invaluable information, and comments about the nature and the formation of the discipline. But pharmacology is not just any area of medicine, and Galen is no ordinary doctor.

A Greek from Asia Minor and Roman citizen, a physician to the emperors of Rome as well as a successful professor (with a fair number of hetairoi), Galen writes countless works, knowing they will be scrutinised. In the shadow of the Palace, the Pergamene works towards posterity, yet strives to preserve his Greek identity in an imposing setting not deprived of menace. The dark reign of Commodus – the oldest criticism of which happens to be found in Galen – only marks the beginning of a changing world; moreover, physicians fight over enviable positions near prized elite patients, ready to take advantage of the slightest mistake by their competitors. A shrewd courtier, Galen is mindful not to record or advocate any harmful substances, ambiguous preparations or magical practices.

Writing about remedies is fraught with difficulties because it encroaches on magic and witchcraft, secret arts that the Empire tried to suppress. The knowledge of plants and other active substances (pharmaka) comes with the power to kill: who knows the remedies, knows poisons. Galen routinely complains about ruthless practitioners, but in his pharmacological works he shows particular anger and frustration at those who facilitate crime through the circulation of dangerous recipes. Yet on account of Galen’s testimony, remedies can become problematic in all sorts of ways; being even remotely associated with magic was dangerous, and he therefore must distance himself from any apparent misuse of animal parts and of the human body. For a Greek like him, learning and reading about borderline remedies based on animal and human substances, was certainly common. Galen’s empiricist teachers in the Greek East were versed in the entire range of medicinal resources. Aischrion of Pergamum, one of Galen’s masters, did not leave any written works but passed on his knowledge orally, evading the gaze of imperial scrutiny. Whichever evidence we have of such knowledgeable practitioners is mostly owed to Galen. The same Galen, we hear in De indolentia, was entrusted with rare, precious recipes by wealthy collectors and friends – recipes that could not be allowed to fall into the wrong hands.

Of course, showcasing such evidence of ethical behaviour and trustworthiness is part of Galen’s authorial strategy; coming across as an incorruptible defender of the true art of medicine and a protector of human life was key in winning over the readers of his time, and avoiding trouble. Yet Galen is also genuinely concerned with passing on essential knowledge; some borderline remedies (such as Aischrion’s burnt crab powder potion against rabies, or amulets involving dung) thus must be recorded: they are scattered among the last two books of On simple drugs, written late in Galen’s life (and in any case after 193 AD). Similarly, the bibliographical information carefully provided by Galen serves a double purpose: showcasing his own reliability as an author and a practitioner, whilst also providing readers (especially his students) with the possibility to look beyond the realm of acceptable remedies.

Such is the role of Galen’s comments on Xenocrates of Aphrodisias, a physician who lived “in the time of his grandfathers”. Xenocrates’s 10-book long treatise On animal parts, featuring the use of human body parts and secretions is lost; our only information about it derives from Galen. It may be that its contents made it rare and almost secret, forbidden reading: according to Galen, it is surprising that Xenocrates could write about this material at all, since it was falling under the laws of the Empire (he may be referring to laws against black magic, an art which involved human body parts). Whilst Galen falls short of copying any unauthorised material, he provides his audience with a useful summary and inadvertently (?) entices the reader to look up Xenocrates’ work (and potentially use it). Human sperm, bones, blood, and parts of rare, exotic animals such as hippopotamuses or elephants, or even basilisks (see text below): such is the contents described in neutral terms by Galen – and thus subtly advertised for his curious audience.

The same could be said of his stance against Pamphilus, the compiler of Greek and Egyptian (hermetic) simple medicines he attacks at the beginning of book VI. Under the excuse of drawing clear boundaries to his art and defining proper medical practice, Galen also provides precious information about little-known, illicit knowledge which, for all its flaws and dangers, was part of the Greek medical tradition. Whether such works circulated widely is difficult to establish; even standard medical works had sometimes become exceedingly rare in Galen’s time (such as some works by Archigenes of Apamea he set out to recover at great cost and effort).

In our libraries today, comparatively few manuscripts of Greek magical or hermetic knowledge are to be found, let alone read. Historians work on artefacts such as amulets, curse tablets and incantations preserved on papyri instead: they have uncovered extensive evidence of what must have been very common knowledge and practice. Galen’s precious evidence about the history of pharmacology, complete with rogue practitioners and propagators of Eastern magical practices, is all the more intriguing. It draws attention to the learned, sophisticated side of borderline practices in medicine, beyond the categories of so-called “folk” and “religious” medicine. But it also unveils Galen’s clever ways to diffuse controversial knowledge (and evade criticism for it) whilst expressing ‘disgust’ at forbidden practices.

I admit that there are many parts and fluids contained in the bodies of animals regarding which I have no experience compared to some who have written about them. A few of these parts and fluids are perverted and disgusting, and others are forbidden by law. Hence, I do not know how Xenocrates, a man who lived not a long time ago, but rather in the time of my grandparents, wrote that he ate humans, although it is forbidden by Roman imperial law; yet, as if having tried it personally, he very credibly describes which diseases are cured by eating human brain, flesh or liver, and which by drinking <potions made from> the bones of the head, thigh or fingers, some burnt, some not, and which by drinking blood itself. All these, although forbidden by law, at least are not perverted. But drinking sweat, urine and menstrual blood is outrageous and disgusting, and no less than these, faeces; Xenocrates describes its effect when spread over the region of the mouth and the pharynx or ingested into the stomach.He also wrote about swallowing ear wax. As far as I am concerned, I would not be able to swallow even that, no matter how sick I was. But I consider faeces more disgusting than that. And for an upright man it is a much greater insult to have a reputation for eating faeces than to be a pervert or a deviant (and among perverts we are more repulsed by those who indulge in Phoenician than in Lesbian habits, which the act of drinking menses comes very close to). Hence, a man who respects nature would never permit himself to try these remedies, nor even more moderate remedies than these that are still perverted, such as spreading human faeces or semen on some part of his body in order to cure his disease. Xenocrates used to call the latter gonos, and he distinguishes will all due care which problems are cured by applying semen alone and which by applying semen that has flowed out of the vagina after intercourse.For one must be in dire need of remedies to go as far as to cure chilblains by applying a man’s sperm that has not stayed inside, but flowed out of the woman’s body after intercourse. His books about the usefulness of animal products indeed contain much material of this sort. Obviously, he explains not only the actual effects of drinking human urine or swallowing orspreading human faeces on the mouth, but also those of each and every animal – but especially of those difficult to procure, such as elephants and hippopotamuses. I have never seen the beast called basilisk, but, if what is said about it is true, then it is dangerous even to approach this animal.

*About Galen’s pivotal role in providing a functional, inclusive framework for ancient pharmacology:

*About “popular” medicine in antiquity, see the papers assembled in: